Memphis, Tennessee author, editor, and ghostwriter Dannye Williamsen talks about the evolution of her writing career on my blog today. It is my great pleasure to welcome her. -Linda Lee Greene

I was born in Memphis, Tennessee in 1949. I was the child in the middle and a tomboy, who hated dolls. My favorite Christmas gifts were a cowgirl outfit and a football.  I outgrew my sisters and was 5’7” in the sixth grade. They used my shadow in class to test the position of the sun during the seasons because it was longer than everyone else’s!

My first attempt at writing was in the eighth grade. My full given name is Dannye Sue (a Southern tradition, of course), but my teacher at my new school refused to call me anything but “Sue.” She said “Dannye” was a boy’s name. I refused to answer the roll until she called me by my first name. The incident prompted me to write a paper titled “My Name and I” for a contest put on by the high school newspaper. I won! In high school I was thrilled to be on the newspaper staff and then the Editor-in-Chief. Our newspaper won a first-place award at the national conference for high school newspapers that year.

My business life began in earnest when at 22, I went to work for a land investment and construction company. Eventually I was in charge of apartment construction and the construction draws. For a tomboy, this was very cool! In 1975, I was sent to Arkansas to oversee a strip mining operation. Boy, was that a trip! I crawled in and out of an 80’ pit so many times in that year that I wasn’t much wider head-on than I was sideways.

The government change in the regulations on sulfur content of coal found me back in Memphis where I opened a small nightclub and later an after-hours club. It provided a lot of life lessons. I met and communicated with diverse groups of people, learning firsthand that we should never make assumptions about other people unless we’ve walked in their shoes.

After two years, I tired of the pace and late hours and pursued something more challenging and interviewed for a position with a brokerage firm that had no potential for advancement. Down the hall, a sign on a different door read, “Technical Research.” The Director of the place assured me I could become a technical analyst if I invested the energy, but he only had one position open: assistant to the grain analyst. He informed me that no one had ever lasted in the job for more than two weeks. I quickly responded, “I’ll make it work if it kills him!” He liked my chutzpah and hired me.

One year later I was offered the Financial Instruments markets. At the time, they were not big trading markets, but within two months, a shift made these the premier markets. I analyzed the prices and projected the movement of the markets. We broadcasted worldwide every morning. I was also asked to teach technical analysis to incoming account executives in Chicago. This was a treat because teaching had always been a secret passion.

In 1981 I was asked by the president of a cable construction company if I would go “undercover” to find out why the company was losing money. I moved to Austin, Texas, which was undergoing the first rebuild of a cable TV system in the United States. After discovering the project manager’s shady practices, I was asked to take over his position. It was challenging and fun. We went from being in the hole to producing a quarter million dollars per month. The hours were horrendous, but I loved it.

With the job complete in 1984, I returned to Memphis. Just before leaving Austin, I discovered a spiritual path that has directed my life since that time. Upon returning to Memphis, I met my husband, John Williamsen. He was minister of a Unity church there. We married two years later, and he also reopened his dental laboratory business. We operated the dental lab until 2005, and during that time, we also had a small church. In addition, the two of us returned to the University of Memphis from which I received a degree in psychology and he in metapsychology.

Going back to college was an emotional journey for me. When I was in college before, I had severe headaches that resulted in short-term amnesia and was told that I would have to take 75 mg of Elavil per day for the rest of my life. I knew that wasn’t going to happen so I worked to get control of the headaches and within a year and a half, succeeded. Unfortunately, I had had to withdraw from the university for medical reasons. Going back was closure for me. It was a wonderful experience and I was pleased that at 46 years of age, I scored in the top 1% in the nation on the senior test. I was middle-aged but still able to compete!

In 1998, I tried my hand at writing a novel, a much bigger and less technical writing project than I had ever taken on Looking back, I realize how naïve I was about the industry. In 2001, my husband and I took on a nonfiction project. After I wrote the manuscript, we searched out a studio to record it. We spent $7,000 before I decided to buy the equipment/software and do it myself. The sound engineers had little experience with spoken word. It is different than music. After completing our project in 2004, our 5 CD audio book won a Bronze Award in ForeWord Magazine’s 2004 Book of the Year Awards. It was touted as having ”flawless CD production values” by Midwest Reviews, which made the $7,000 we lost more palatable!

After moving to Atlanta in 2005, I combined into book form the essays I had written for my ezine titled “Metaphysical Minute.” Both of these projects were done under our publishing company. Subsequently, I produced all our books and CDs through CreateSpace or Kindle because it was more cost effective. I had been rewriting my first novel as well as an “extension” of it. Eventually, it emerged as two books, and in 2010 I published them through CreateSpace and then Kindle.

Throughout the first decade of this century, in addition to those mentioned, I continued life coaching, edited a number of manuscripts, completed copywriting jobs for companies such as Georgia Pacific, edited marketing pieces and contractual agreements, as well as building Web sites for myself and others.

In 2011, I opened Breakthrough Bookstore to spotlight self-published authors and to cater to my love of books. Following a year of operation, I discontinued it and focused on my own work. Combining my spiritual philosophy with my management experiences, I wrote additional nonfiction books.

We moved to Memphis in November, 2012, to be close to family. My husband had suffered a stroke in 2008 and again in 2009. Each time I had to teach him to read again. He wrote a coming-of-age novel titled, “The Evolution of a Slingshot.” I am very proud of his determination, his strength, and his writing. He passed away in 2020.

In the last decade, I have published six more novels and six nonfiction works. Currently, I work as a ghostwriter at Heart Song Ghostwriting. 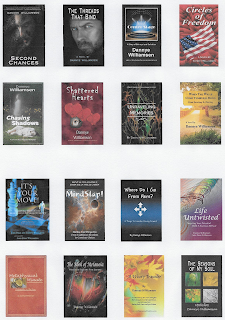 Posted by Linda Lee Greene at 4:02 AM